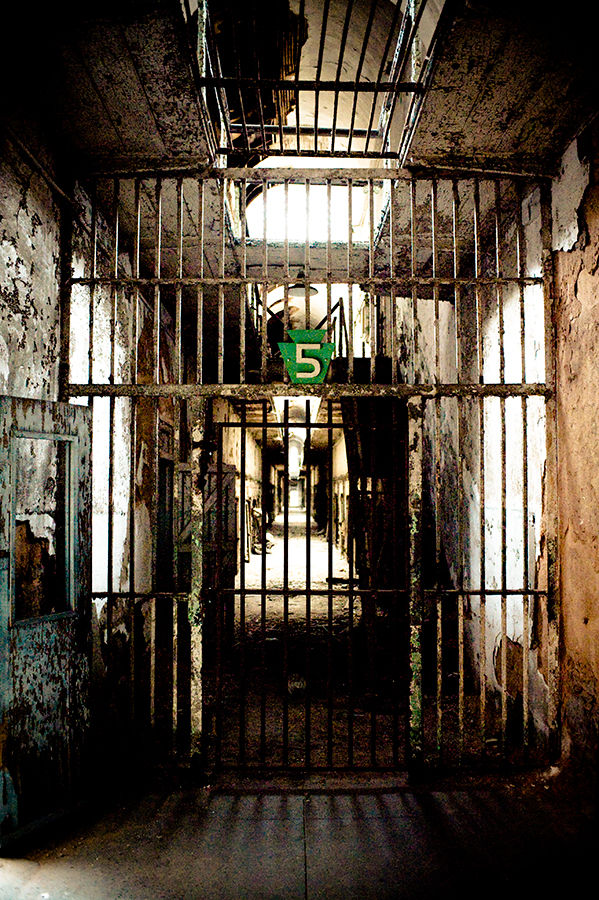 Posted by Laurie (New Jersey, United States) on 30 June 2009 in Architecture and Portfolio.

This is another in the series of images from Eastern State Penitentiary in Philadelphia PA. This place was a treasure trove of photo ops. Such interesting light and textures, and such a grim mood there, yet at the same time totally captivating. It was such an odd juxtaposition. I felt excited by the possibilities and yet the gloom did instill a creepy uneasy feeling.

This was taken on a photo meet up with Betsy Barron, Dan Creighton, Pat Shorten, Ed Heaton, Kelly Heaton, Paul Michko, Lindsay, Russ Devan, Russell Jackson, and Mark (Sherpa) Jackson, at Eastern State Penitentiary in Philadelphia PA on June 5, 2009. It was raining and nasty out which was the perfect weather to be in this place. Check out the slideshow page for more.

I want to take a moment to express my sympathies for the people of Iran during such turbulent times. I hope and pray that they have their voices heard and that the terrible violence against them is ended. I am including some links in this post at the request of a fellow photoblogger.
http://onlymehdi.aminus3.com
http://photoblog.com/onlymehdi
ONLYMEHDI

Lovely image. I am envious of you. I wish i too was there at the meet.

This is simply excellent! Such a grim place and such a great photo!

This place is treasure for photographer! Very nice job!

fantastic - my kind of place!

Fascinating image - and I echo your feelings about the site.

Awesome, I would love to meet this kind of place...

This image shouts "moody". Well done and sounds like a good time was had by all.

What an opportunity to shoot here! I know the creepy uneasy feeling as I have felt that way in abandoned houses too - love the photo ops but it brings a sadness over me.

This is such a wonderful series. It tells such an amazing story. Love the depth in this one.

stunning shot, one my my faved

Francesc B. from région parisienne, France

That's a very nice shot, I really like the details of this shot.

Ho, completely amazing. You push me into old B serie movies. WOW! It is a place that I need to visit. Bravo.

Superb framing of the shot. I love that grainy touch to the shot.

This is a very powerful image. well done

An impressive place, and a great light.

It almost looks dangerous, like a hunk of concrete could hit you on the head. Intrepid shooter here :)

You're right, a treasure of photo ops. What a place for textures and light. I would love this place even with all of the creepiness. The endless hallway is chilling.
Superb shot.

great shot but i got bad feel .
This is a terrific place :(

Beautiful textures and colors. I prefer the picture cropping the upper part, may be keeping the 5 with little space above?

This is a great shot. Love all the textures and the geometry.

Thought-provoking reportage here . . and very impressive handling of the dynamics, too !

shoti from Everywhere in the, Philippines

powerful indeed. I feel like I'm in that place right now. I feel isolated, eerie and curious at the same time. my adventurous nature would push me to go beyond those rails :)

What a shot. Wow.

Hi Laurie,
Grear series.
Love the way you select the scene and how you process the images to communicate the squalid mood.
Stunning work ;o)

Outstanding "low" light picture. Amazing sharpness and DOF for the conditions. It captures the mood of the place so very well. Congratulations!

Several of my photog buddies have photographed here. You captured the mood of the place perfectly.