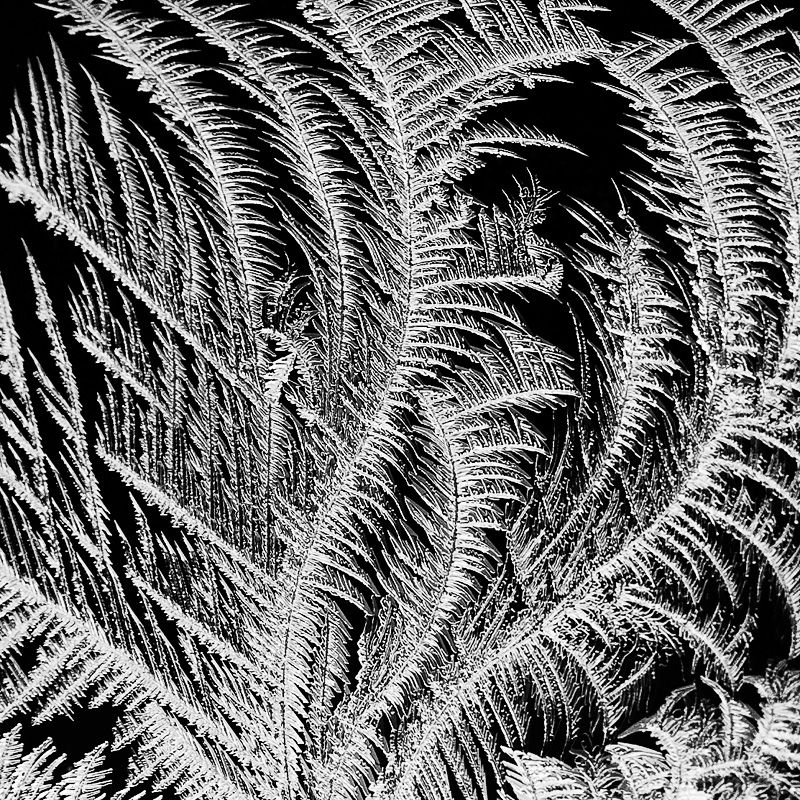 This was shot a week ago on January 16 on what was probably the coldest day I can actually remember. I found this tiny ice crystal on my back window and thought it looked a little like a fern. It was no more than one inch across its entire length and this crop is only a very small fraction of that.

I did use a macro but decided to do this close crop because when I looked at the zoomed in view of it in Lightroom I liked the way it filled the frame. This was also converted to black and white because there were some little color gradients that I found slightly distracting.

absolutely fabulous Laurie I love it

This is amazingly beautiful. I will have to learn a lot more about the formation of ice crystals now. I had no idea how unique they can be. You've found a beauty here, and done a wonderful job of capturing it. I'm glad you stayed inside! Nice plan to show it in B&W, I wouldn't have thought of that.

Visit my site if you'd like to see some ice crystals I found (January 8 & 9) ... so different from yours.

wonderful patterns - I tried shoting some of my own and know how tricky they are - you did a wonderful job....

Excellent, Laurie. It does look like ferns. The curves are graceful. As I read your description above, I thought, oh, she could have gone outside for a few minutes. Then I came to the ladder part and I thgouth, no way! Smart Laurie.

This is so delicate and the B&W is perfect for the abstract. The window didn't detract from the beauty of your image at all.

Amazing shot, Laurie - my first impression was that it was a fern. Simply beautiful.

Great shot. I too, at first glance, thought it was a real fern. Well done!

Gorgeous! I have tried to do this before but not to the success you have had here! Well done!

Fantastic!!! Looks like some sort of print. Love the feather-like detail. WOW!

Very nice details and composition! Congrats ! I also like spending some time in my frosty windows. Amazing what we can find there ;o))

This is an absolutely beautiful image. The contrast works very well indeed. It looks like a fern to me too.

VEry well done. Thanks for the description. It turned out pretty cool.

I need to re-read up on latent heat dynamics because I was convinced I was looking at a fern ! You did really well to catch this through the glass so well but, more than anything, the success depended on actually seeing and taking the shot. So often the case.

as said before, just fantastic! (see, this horrible cold is good for something!)

Beautiful shot. I like the way you cropped this. Looks great! (Nice choice for black and white too).

A wonderful work of art, abstract and works well in B/W. As for the cold, I've come to realize the later years of my life are going to be a fair-weather photographer. LOL

Beautiful flowing and original with an excellent effect, Laurie.

Wow! This is a great abstract Laurie! I thought it was ferns until I read your commentary.

One from Açores, Portugal

Wow, amazing shot Laurie, it's indeed like a fern and so well captured. Love the structure and the B&W. It reminds me of those fossil ferns you sometimes find in coal stone.

It must have been really cold..... I haven't seen frosted flowers for many years now. Super shot, it almost looks etched.

This is stupendous. I love things that make us looks closely and see a whole world, and this shot does that wonderfully. Thanks for sharing that tiny spot of beauty.

Fanstastic result. I like the monochrom tone chosen. Unusual view of a fern. Bravo.

Fantastic image, Laurie. I like how the background went to black when you exposed for the ice. I never saw ice form this kind of intricate, fern-like pattern before.

@Russ Devan: Thanks. I did convert to black and white for this. There were some little color spots that kind of distracted from it. Ice crystals are always fascinating.

can I say - WOW - my lady you have won my heart. This is wonderful and to think you were itching to get an even cleaner shot. This is terrific!

Pretty graphic, I do really enjoy all your pics, this one is different, like if suddently your artistic side was just ready to pop out :P I do enjoy it ! Thank again for all your kind comments my friend.

This is a really beautiful image. It does look like a fern and also reminds me of those fractal images that we studied in math classes.

awesome photo I love it