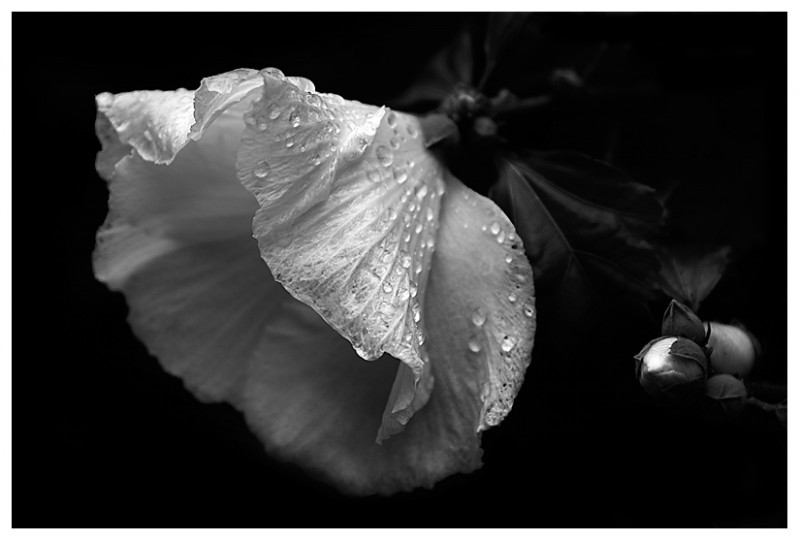 I don't ordinarily post the same photo on both of my photoblogs at the same time, but this is my personal favorite so I chose to post it on both of them since I know not everyone who visits this one visits the other one and vice versa.

Just off my back deck I have a large all white variety of hibiscus. It is a beautiful plant with a profusion of large pure white flowers that start to bloom right around the beginning of July and keep on blooming until late in the fall when the frost comes and touches it ending it's season until the next summer. It is my favorite flowering plant because it's season is so long and the flowers are so stunning and pure white.

It was a day of heavy, soaking rains last August. Later in the afternoon the skies started to clear and the sun came out. The air smelled so fresh and clean, and everything was heavy with rain water. I stepped out onto the deck and noticed the way the light was touching the Hibiscus and reflecting in the drops of rainwater that weighed down the delicate, now translucent, petals of those wonderful flowers. It seemed sad and yet so beautiful at the same time.

This Hibiscus was the very first thing we planted when we first moved into this house in April of 1993. This house is actually the house I grew up in. My parents sold it in 1987, and we bought it back from the same people my parents sold it to in 1993 shortly after Jon was born.

This is probably my favorite shot to date. I don't really know why I hung onto it so long except perhaps because I have so many photos of this Hibiscus and it was somewhat lost among them all.

Please visit my other photoblog Capturethisphotography.com

Beautiful and delicate. I love how the dropplets sparkle of the blossom.

@photowannabe: Thanks. I always appreciate your visits.

@CaCTuS: That's a lovely way to put it. Thank you.

Absolutly beautiful! I can see why you love this photo so much!

Very delicate and beautiful. Love it!

@sujit sudhi: Thanks so much.

Great capture. The hibiscus looks very exhausted after the rain. You can feel this.

@dee: Yes it did look rather tired. It was quite soggy. Thanks.

Amazing shot! This is really a beauty! My congratulations! Superb!

@adalove: Thank you so much.

Another gorgeous black and white shot.. Really great one

Can't think of a better adjective... but I'll use Stellar. and maybe Perfect.

@amy: You are too kind. Thank you.

@Manon: Thanks. I really like to work in black and white.

@frank: Thanks so much.

@Reza: Thanks. I am a bit of a black and white addict.

I apologize for the double post. But, I was just looking over your flower series and wanted to complement you on a fine series! Your photos exemplify your accomplishments in photographic art!

Vahid from Bø, Norway

I love this shot! Well done!

Doesn't get much better.

The background is a perfect black - truly professional. Water drops, the b&w processing and details on the flower are all amazing.

@Michael Zhang: Thanks so much.

Your memory attracted me very much!
I think eace photo must have each memory.
Great pic!

@miu*: Yes I like to think so. Most of mine have some personal meaning. Thanks.

This is a beautiful photo Laurie, I love it!

Show Off!!! This is another B/W conversion that has perfect tones! Just wonderful! I'll give 3 WOWs!

i can tell why its your fav=) i love it too.. so crisp and powerful.

Lauri, I enjoyed looking at this strikingly beautiful flowr! It's so amazing =)

@Wendy: Thanks. I really appreciate that. It's one of my favorites.

Great macro photo. :)
and I like the B&W style.